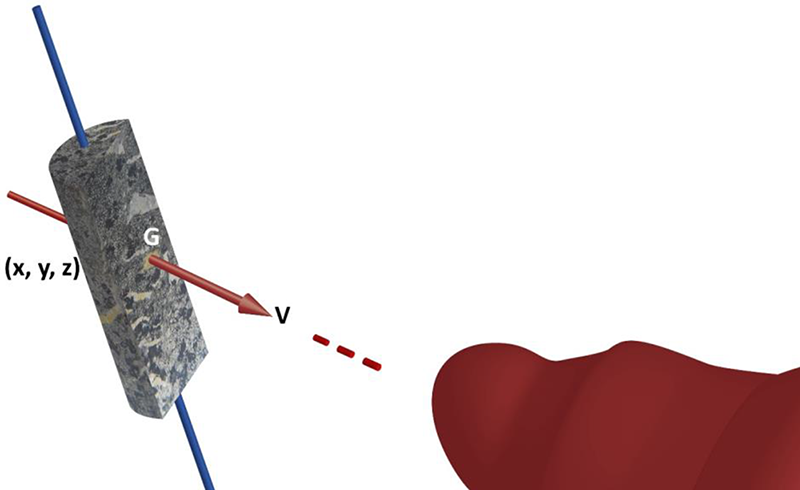 Nevertheless, if you want to consistently drill for exploration success, take note of the following: drill into the mineral body, not the mineral target!

The discovery hole and the holes that follow must reveal the most reliable information to allow for an accurate valuation of a mineral property. The collection of mineral intersections created by drilling is the result of the interplay between two distinct geometries: the drilling configuration and the mineral body. I call this cloud of piercing-points mineral intersection geometry or MIG. MIG is not to be confused with the mineral envelope. MIG is about the orientation, distribution, quantity and quality of the mineral intersections provided by a drilling campaign. MIG is the set of mineral intersections used to produce a mineral envelope. Different exploration teams will surely come up with diverse MIGs and therefore they would be susceptible to create different mineral envelopes. Some mineral envelopes will be very good and some others will require additional drilling to approach a reasonable MIG. The best MIGs are the result of a real-time and dynamic review of each borehole that cuts through the mineral envelope. Necessary changes should be carried out to the next borehole and so forth – so the drilling geometry must be highly interactive, otherwise the MIGs will be poor. Well configured MIGs are more predictive and less expensive than the poor ones and will speak volumes about the experience and strengths of the exploration team. A mineral body with a reliable estimate of grade distribution and geometry is a required product to raise interest and investments.

How can one accomplish an effective drilling workflow task, which allows the drilling results to generate the best MIG possible, in a timely manner, within budget and thereby deliver value to investors?

In order to tackle this question one must recognize the power of drilling into the mineral body – a three-dimensional entity, to understand the grade distribution in the context of a particular geometry. This may seem simple and straightforward, but good exploration practices need to be followed to maximize value and minimize risk. The broad framework of such workflow is already out there in the industry (Vearncombe, J. & Vearncombe, S., 1998; Marjoribanks, R., 2010; Davis, B., 2012; Holcombe, R., 2014; and Monteiro, R.N., 2015).  However, it needs to be reconfigured in such a way that it would allow for early predictionsabout the shape of the mineralization, and its continuity and grade distribution. In this context, I expect that if the current industry XYZG Exploration System is augmented with the addition of mineralization-related structural vectors to build the concept of the XYZGV Exploration System the reward should be significant – as it will be explained ahead. By adopting this practice, and optimizing the MIG, exploration geologists should be able to better manage their exploration time and budget, while reducing risk and controlling uncertainties.

The XYZG stands for (x, y, z) coordinates of a sample that returns G, which is the grade. The G of the XYZG is just a scalar property! This is the traditional geochemical or assay sample we collect from core. It is a one-dimensional value that has no directional information to be projected into the three-dimensional space – unless, for instance, it can be vectorized by variography; however, such vectorization requires a large amount of mineral intersections – increasing time and investments – before spatial inferences can be drawn.

On the other hand, XYZGV is geometry-based at each sample site. XYZGV stands for (x, y, z) coordinates that returns not only G but also V, which is a type of vector (Allemendinger, Cardozo and Fisher, 2012) – a structural vector! The XYZGV implies that a grade value, obtained from a sample at (x, y, z) coordinates can be described as a vector or axis.Therefore, this grade can be projected along the mineralization-related structural vector. It not only empowers the exploration geologists to early detect and understand the hidden architecture of the mineralization and continuity, but also prompts them to fast redirect drilling to better intersect the mineral body (Figure 1). Vektore has improved such practices (Monteiro, 2013a and c) with proven record of significant successful applications. 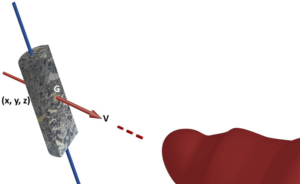 The best possible path from target to deposit can become apparent and acted on, early in the exploration process, if V is considered; otherwise investments can be denied and discovery postponed. As it is indicated on Figure 1, structural mineralization vectors can effectively influence the decision-making process and its exploration path. The XYZGV Exploration System has the potential for providing explorers with a robust exploration workflow that should enable success! So, how can one move from XYZG to XYZGV? By adding two key players to the current exploration practices: oriented core and structural economic geology analysis. One needs to find and characterize the mineralization-related structural features and place them into a reference frame – 3D space, for further projections and predictions; and this is the basis for structural vectoring within the mineralization space. Structural vectoring leads us to better MIGs and more accurate mineral envelopes.

In order to justify the shift towards the XYZGV Exploration System one needs to recognize its potential benefits. Although the use of oriented core and structural geology has increased recently, the current industry practice needs to be improved. Very few companies use core-orientation as part of their best practices, and some of those that have implemented it in the past are still challenged by its workflow and QAQC – fortunately, such issues can be resolved and streamlined if good practices and methods are applied (Monteiro, R. N., 2015 – vektore.com/services/technology-transfer/).

The mining sector is in its critical downturn at the moment. Investments are sparse and investors are carefully scrutinizing potential projects based on their well demonstrated value. Perception of project value and timing are critical! It is vital we extract the maximum amount of relevant information from core and quickly react to avoid costs that do not add value and are detrimental to the project. Such costs could potentially drive us to dead ends. By adopting the XYZGV Exploration System, one is able to capture and understand the broad architecture and structural controls of the mineral body in the early stages of its exploration, with fewer intersections. Adding V to the exploration geologist’s toolbox should provide sufficient and robust information to direct drilling with the goal of solving geometrical uncertainties as soon as they appear – improving efficiency. For this reason, the XYZGV Exploration System empowers us to act earlier and more effectively in the decision making process. Its inherent capacity of quickly determine the most reliable MIG is substantial and it brings excellent backing for an effective press release.

Exploration companies that incorporate V into their current practices would be able to generate better MIGs and interactively and effectively better dissect a mineral body. Therefore, it is not difficult to predict that the XYZGV Exploration System and its capacity to work with structural mineralization vectors will become a valuable requirement in the mineral exploration business in the near future. The current industry situation represents a great opportunity to test the value of implementing the XYZGV Exploration System. Within this context, in a recent interview published by the Northern Miner Daily News (2015), Mr. Cochrane, a senior research analyst at the Metals and Mining Consultancy in London, stated that if gold price fall below US$1,000/oz., miners will have to raise their cut-off grades and focus on richer zones. In this case the understanding of the internal features of their mineral bodies (patterns, linkages, oreshoots’ geometry and continuities) are paramount – adding “V” to the XYZG most definitively helps addressing this need. Today’s mantra is to be fast, within budget and to efficiently deliver results to your investors.

Figure 2, (based on the Blue Ocean Strategy – Kim and Mauborgne, 2005) where we present some of the main players or competing factors that best describe the differences between the two exploration approaches in consideration – XYZG and XYZGV. The competing factors grouped under “create” are critical for structural vectoring and efficiency of an exploration approach, and they are only available in the XYZGV Exploration System. This diagram provides another dimension to our discussion. 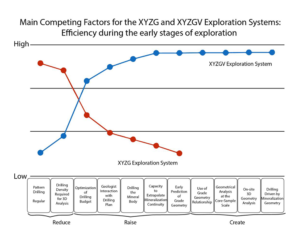 Do you to have intersected mineralization without oriented core? Where to drill next?

Instead of using the trial-and-error drilling approach, with the hope of intersecting mineralization, one should test ways of figuring out the architecture of the target. In this regard, various methods to resolve this problem have been proposed in the literature. More recently, Holcombe (2010 and references herein) reinstated the idea of using the known orientation of a particular reference structure to re-position non-oriented core intervals in its likely original orientation. He called this procedure partially oriented core technique. As a different approach, the Structural Inversion© Method, devised in 2005, is a significant development in the field of processing structural data from non-oriented core. It uses a robust algebraic algorithm to recast the likely orientation of key structural mineralization vectors, which allows significant geometrical predictions (Monteiro, R.N., 2005; Monteiro, R.N. and Koronovich, J., 2006; and Monteiro, R.N., 2013b). This method was single-blind tested before it was deployed for use (Monteiro, 2013b and d and references herein). Since then, it has been used in various exploration sites with significant results by re-directing drilling towards unknown mineral body extensions; notably: IOCGs in Carajas and copper-related mineral targets in the Vale do Curaçá (Brazil). This method should not only conveniently help you to quickly understand the mineral body geometry, but also to acquire sufficient information to predict its extensions and to design a better drilling geometry. Indeed, such application should show you the benefits of capturing the structural mineralization vectors of your mineral target, even before you have been able to implement your own XYZGV program with oriented core.

As a final point, if we drill into the mineral body guided by vectoring the mineralization-related structural features we will significantly augment the probability of an exploration success outcome. This statement comes from our experience derived from different deposit types and exploration sites in a diverse range of mineral districts (nickel sulphides in the Thompson Nickel Belt and in the Sudbury Igneous Complex in Canada; IOCGs in the Carajas Mineral District, gold mineralization in the Iron Quadrangle, copper mineralization in the Vale do Curaçá in Brazil; and copper mineralization in the Copper Belt in Africa). The XYZGV Exploration System has the potential of being one of the much-needed changes in our industry! So, let us drill into the mineral body, not the mineral target! This action will not only potentially increase the return of exploration investments but also strengthen the credibility of the exploration team. Serious investors are on the look for that!