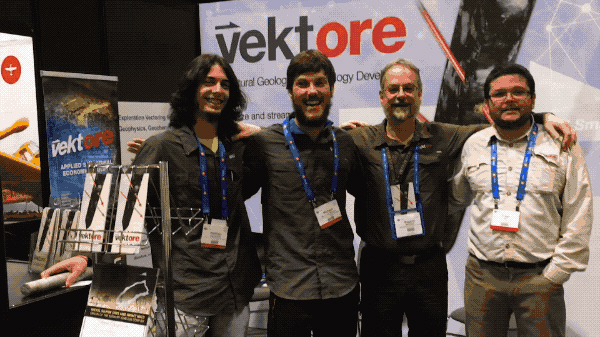 We had such an exciting week at the PDAC 2018! As a result, we’ve been very busy, but we had to write a quick thank you to all who stopped by our booth!

We met with so many people who were interested in our expanding tools and methods and got to share our latest case study in Sierra Leone – where our tools were essential to solving a challenging mineralization scenario.

Our team defined key features that had gone unnoticed by previous structural works. A strong correlation between gold and arsenic was already known. However, the shape alignments of arsenopyrite and their clusters were never used and systematically measured to follow positive gold intersections (even though most boreholes from the last campaigns had their cores oriented). Some types of lineations are directly linked to grade distribution and they are easily measured using the vSET™ software and workflow – Vektore’s structural data acquisition and real-time 3D analysis tools which will be described in a future post.

We were able to monitor, from selected boreholes, the spatial orientation of arsenopyrite lineations (shape and clusters) with ease using vSET, despite the fact that most cores were cut in half. It provided us with the most likely orientation expression of the gold mineralizaton vectors at the core scale. The distribution and orientation of the arsenopyrite lineations significantly matched the grade-thickness maps we produced, allowing us to use them as proxy for the gold mineralization patterns. Such lineations were therefore fundamental for the understanding of high-grade domains segmentation and continuity along the deposit. A detailed follow-up study of the arsenopyrite lineations will allow for improved predictability of shape, direction and continuity of the mineralization. We will support our client to incorporate our findings into the upcoming drilling phase and resource modeling.

We would be happy to discuss the application of the vSET to enhance your project results. Vektore is currently finishing up a commercial version of the vSET software that we have been successfully using in-house for years. If you work for a mining or exploration company and are interested in being one of the first to try the beta version, click the button bellow to request early access!